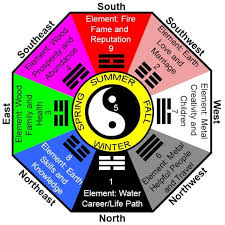 How to Use Your Personal Feng Shui KUA Number Directions

For Your Health, Wealth and Happiness

What Is KUA Number

The Feng Shui Kua number (also called GUA) is an integral part of 8 Mansions (or Pat Chai) Feng Shui. It gives the knowledge of auspicious and  inauspicious directions for a person. According to Feng Shui, each person has 4  good directions and 4 bad directions which are based on one's Kua number.

The Kua number is calculated using one's date of birth and gender.

Broadly, Feng Shui classifies people into 2 groups:
East and West groups. Each person belongs to either one or the other group according to their feng shui Kua number.

Further, each KUA is associated with a trigram. Each trigram has a different number, name, nature, season, personality, family, direction and meaning.  These Trigrams are positioned on an eight sided figure which is used in Feng Shui to set up a Bagua Energy Map of your home. This map is set up differently by the Western and Traditional Schools of feng shui.

The eight trigrams are also called Pa Kua. In fact,  Pa means eight (8) and Kua means suspending or hanging. It is like hanging a picture on the wall to observe it. Actually, Pa Kua suggests that there are eight phenomena which were referred as Pa Kua. These 8 phenomena (images) are sky, earth, thunder, wind, fire, water, mountain, and marsh (body of water / lake). A line symbol system was developed to represent these universal images. These line symbols then evolved into 8 trigrams.

In fact the Pa-Kua is a grid representing 8 life aspirations viz.  wealth, career, fame, children, elders (superiors), friends (helpful people), knowledge & education and marriage (relationships). In a house, there are also 8 areas corresponding to these 8 life aspirations. The Pa-Kua energy map is placed over the map of the house and 4 lucky and 4 unlucky directions are found based on one's KUA number. Feng Shui enhancers and remedies are then applied on the basis of the KUA number. The Pa-Kua diagram is given below:

How to Use Your KUA Directions

All About FengShui KUA:

What is FengShui KUA Number

The details of the 8 different Trigrams are given below

Once you know your lucky feng shui directions, you should try to face them at work, at home and when you sleep. For example, let us say your Kua number is 2, then you are a West feng shui group person and the best facing directions for you are Northeast, West, Northwest and Southwest. These are your lucky directions for major areas of your life. To discover your auspicious directions and how to use them, you first need to calculate your Kua Number.

AstrOccult Feng Shui KUA Fortune Teller is a 100% Free software to instantly calculate your KUA number and provide you the most appropriate advice on your auspicious directions along with powerful tips / remedies and other useful information. Download it free and learn more here.